As we reach the half way point in the season it is time to look back and reflect on how things are going. Thank you to all the coaches who give their time to all the teams in our club. Especially the underage coaches who are doing such a great job. A big thank you, also, to the parents who have been so supportive and helpful. I think it is fair to say that things are going pretty well. As you can see from the league tables below we have 4 teams at the top of the tables. The stars of the year have to be our brand new U-12 team. This team coached by Alison and Christine Kelly have exceeded all expectations and sit proudly at the top of their league having played all their games away from home in the first half of the season. Fiona Clancy’s U-14 girls are also having a great season and this team have show great improvement and form so far this season. Our senior 5 and 1 teams also sit at the top of their league and also have important cup games coming up after Christmas. The U-10’s and 11’s played their first ever games 2 weeks ago and showed great promise with more to come. The U17 girls sit 3rd in their league while the U18’s are in 2nd place in their league. Our Div2 senior are going through a transition period with many new players and sit mid –table. As they gel together as a team they will start to notch up more wins in the 2nd half of the season. All in all you would have to say we have had a good first half to the season but like our politicians say “Lots done, lots more to do”

So lets keep it going and keep building our club to aspire to great things. Happy Christmas to all of you. COME ON TRIDENTS !!! 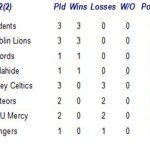 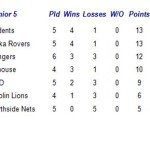 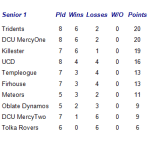